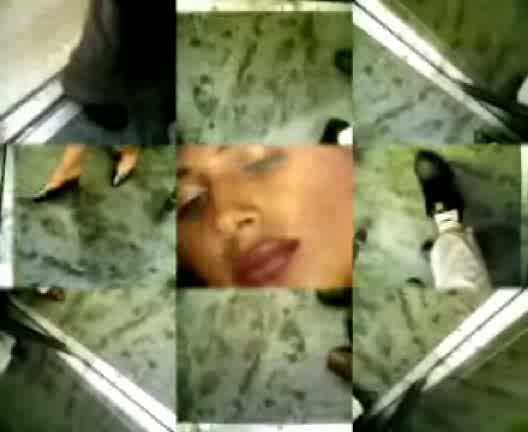 Looks and desires in the subway.

Sitting in the Parisian metro, on line 4, lighting my 3G phone, appears on the screen the line of threshold of the door of the metro. The idea comes from a film in multiple screens, structured in space around this line of doors, which an octagon around the image. 8 shots, during a course of the line 4. 2 minutes for each angle, so that the film lasts 2 minutes.

We see on the screen in two minutes simultaneous the real time of about 20 minutes. If one observes the movements of the characters, their dynamics, there is the coexistence of several diachronic temporalities in a synchrony dictated by the spatial construction. During the filming, very strong feeling of this tension, of this diachronic counterpoint that could be at work in this split-screen.

Mandatory downhill at the Porte d’Orléans station, the terminus. The shoot just had time to be finished. The characters in the film are gone. It lacks the central image. So I have to go through the corridors of this station to join the other platform, from which the metro will go back in the other direction. Indeed, the filming imposed on my planned journey up in this metro.

The shooting finished, apart from the central image, I fed the project to do the editing of the film in reverse, on my return. I’m in the subway, I have a laptop, I’m in the creative gesture, it’s now, right away, that I have to do it. In the corridor of the station Porte d’Orléans, a poster, with these bodies. It is the center. It is at the center of the time of the making of this film, and these looks, these gestures stopped, those skins exposed in the poster are indeed the complementary sign of the images I have just made.

Turning, in front of the poster, images for the center point of the space of the film. So I go back in the metro in the opposite direction. I turn on the computer, I take out the memory card of the phone, I pass the images in the computer with a small card reader, and then I begin to build, with video editing software, the spatial structure of the film , The small technical protocol that will allow me to concretize my idea of ​​filming. It works. I “throw” there the important things.

The gesture was captured. A film, not quite finished to be mounted, is the trace. In the evening, so soon after, it was the way back, I finalized, it is actually a bit complicated, placement of the elements, I work on the sound illustration, from my sound library, Feeds regularly. And finally, I publish the film on the Pocket Films Festival mailing list, the same evening.