Since January 9, 2016, the film “Tell me LED” will be visible in full online, free on http://parlemoidel.maisonpop.fr and www.benoitlabourdette.com.

“Tell me LED” is a feature film (65 minutes) resulting of an innovative experiment created during a residency of the same name, on territory in Montreuil (Paris region, France) in 2015.

Many proposals for shared audiovisual creations, in the aesthetics of Benoît Labourdette (cartoon films, self portraits, drone films, Pocket Films, kaleidoscopes movies, itinerant projections with pico projectors...) were offered to various audiences, from seniors to very young children, one-off experience in projects throughout the year, from intimate films made alone to collective films made by fifty people... This truculent imaginary expressed in terms of organized images and sounds, disseminated throughout the year in the territory, the dialogue between the world of the artist and its appropriation by the inhabitants, were the invention ground for the film “Tell me LED”. The choice for a filmmaker to create from collective exchanges, where everyone can find himself.

Terms of inspiration, matter of stories, lives, memories and dreams, images, materials, voices that tell and tell themselves. Dramatic power of matter. And a film that is born, which is discovered as a carved block of wood, the nodes within revealing measure of labor forms and their stories. The story of Marcelle, who died during the year, which had a lot to convey, the story of Boris, director at the stage of the end of his story, the story of childhoods of adults and childhoods of children, the story of people whose lives intersect and make sense, the story of longing and utopias, history of laughter that saves, the history of the human family that recognizes, the history of the Women’s House, the story of Annabelle and Benjamin, who went through Montreuil and met so many people to make films, the story of Benoît, that jumps to his eyes the depth and meaning that everyone finds into creative expression, the story of Louise, who walks in these images, flying through the air...

Film made with permanent layering of images and sounds, like a choir that sings self-creation through artistic expression. We are creatures of language, Lacan said. 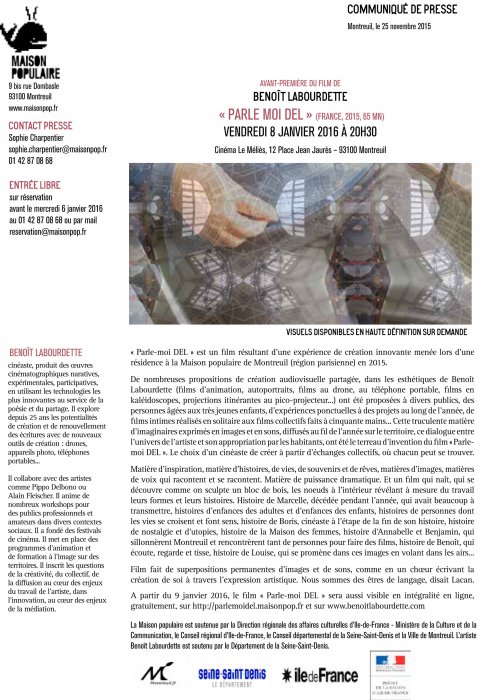 Creative Residency at the Popular House of Montreuil : participative creation and feature film. Presentation of Creation of Creative Residency Web site dedicated to “Tell me DEL”. During the year 2015, the Popular House of Montreuil invited me to make a film work and participative transmedia, which gives existence to a feature film, “Tell me DEL”, whose premiere took place January 8th 2016 at Cinema Le Méliès in Montreuil.