Classical:NEXT 2018 (Rotterdam, The Netherlands) featured France. Opening evening on May 16, 2018, for 700 professionals from the classical music sector.

At the request of Françoise Clerc, head of classical & jazz of the agency Le Bureau Export, we designed and produced in very close collaboration the structure and contents of the opening evening of Classical:NEXT 2018, which was devoted to French classical music :

The challenge of this project was to present to professionals from all over the world a faithful image of the French classical music sector, through synthetic videos, clear speeches by specialists and performances by leading French musicians.

The aim was for the audience to learn a lot about French classical music, within the framework of an evening organised as an interesting, rhythmic, touching, varied, funny show... with a high level of artistic requirement in all aspects, including the staging and rhythm of the show.

This show was made up of videos, lyrics and embedded musical performances.

As the project was being designed, I used a precisely timed database so that I could share the exact progress of the evening with all those involved in the project: 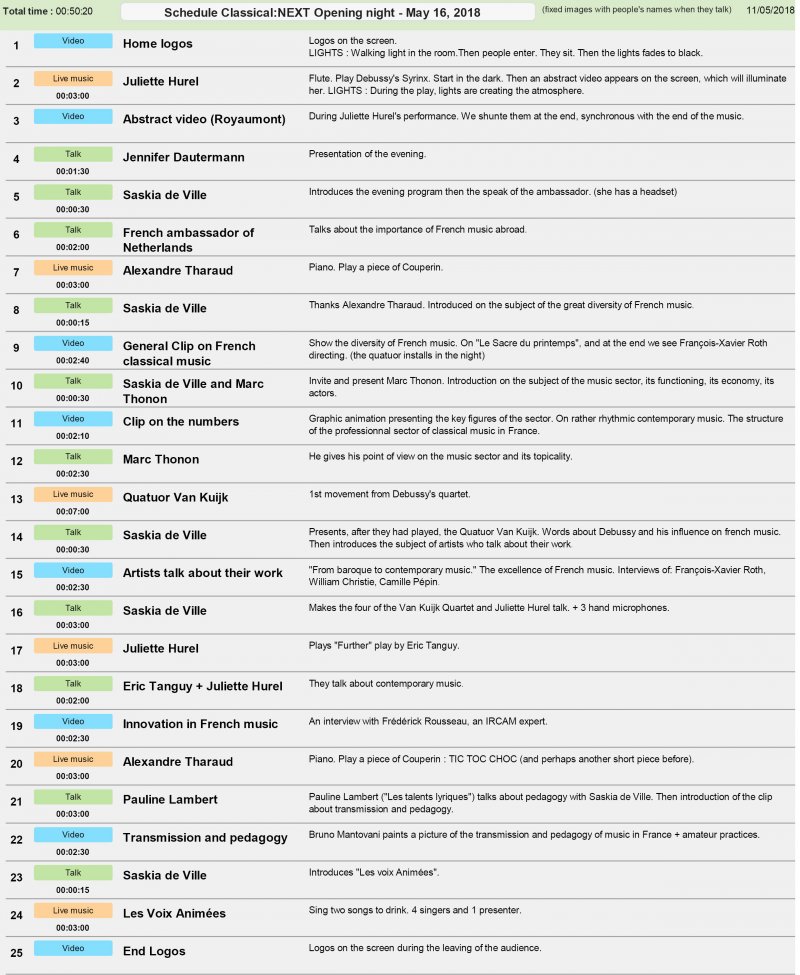 Video (videos can be viewed at the bottom of this page) An abstract video shot at the Abbaye de Royaumont (Reconstruction) accompanied the first piece played by the flutist Juiette Hurel. Thus, the evening started with a fully artistic approach. 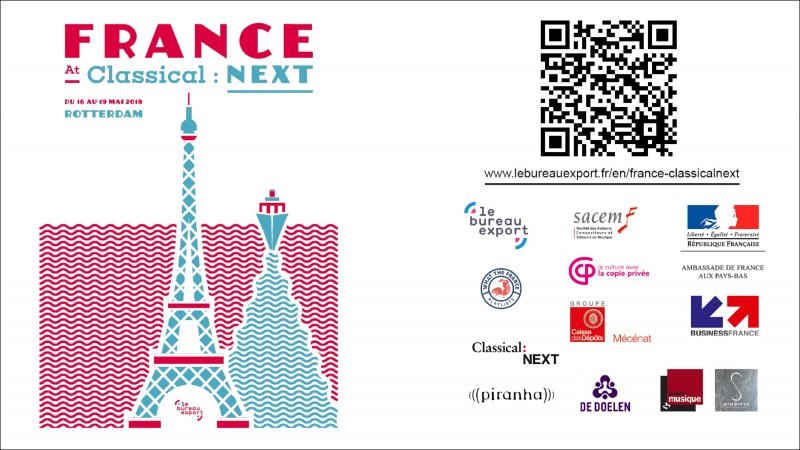 At the end of the evening, a QR Code displayed on the screen allowed the spectators to find directly on their phone a dedicated website with all the details as well as all the videos.

Such an evening has high political and economic stakes. Its organization must therefore be irreproachable. To achieve this, the working method is key. Rigour and flexibility must be combined, because sometimes last-minute changes are essential to a good balance. The more rigorous you are, the more flexible you are. It is also very important that all partners can validate the content upstream.

The timed schedule of the evening has greatly evolved over the 6 months of preparatory work. Each of its updates was sent to all stakeholders (from facility managers to managers).

This schedule was divided into numbered “blocks”. One by one the films and titles of the people who would appear on the screen were put online on a private server with their corresponding number. Everyone could therefore very easily find his way around:

Thus, we were able to receive many comments from each of the partners over the months, each contributing in a very concrete way. The editing of the videos has had many successive versions, by these “iterative validations”. The method of editing the videos was “agile”: we were able to accommodate changes as they unfolded. As if the films were polished by multiple people like so many small sculptures in which each finds its reflection.

Agile method It is an “agile” working method (derived from computer science methods) applied to the construction of a cultural project. This is allowed through the Internet, without using the services of the GAFA.

This document, this “scenario” of the evening allowed everyone at their level (content, lights, videos, speeches, music, stage management...) to become aware of their place in the whole, guaranteeing coherence. It has evolved enormously as the work has progressed and has also been a real decision-making tool.

Mentions on screen Each person who appeared in the films or on stage had on the screen the mention of his name, with a graphic dressing mixing a score by Luc Ferrari (“Tête et queue du dragon”, 1960) and the visual identity of the event. 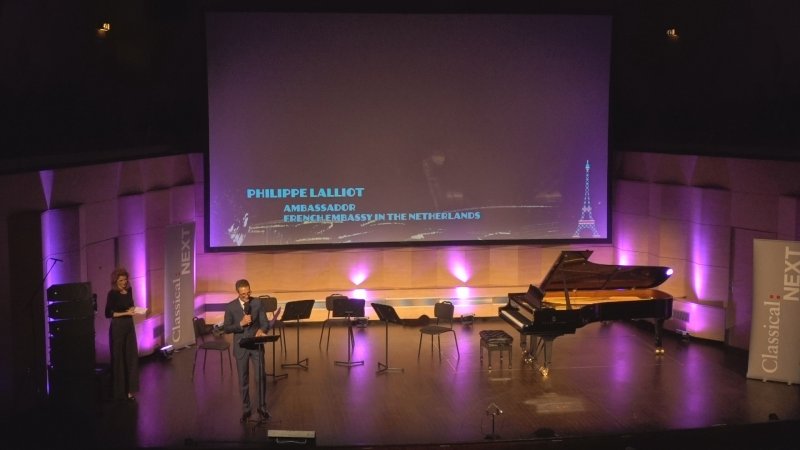 It is a point that seemed very important to me for the spectators: often, during speeches with successive people, we do not know exactly who is the person who is speaking to us (even if he introduced himself). Writing her name on the screen while she speaks gives the viewer real comfort, which makes it all the better to receive what is offered.

The musicians also had their names indicated while they were playing as well as the exact references of the composer and the work played: not only are we a spectator delighted with the quality of what he hears, but we are also a spectator who learns, who receives precise information.

Using the same graphic design for the names and titles of people in the films and on stage contributed to the homogeneity of the evening.

Stage and light The work on staging and light is also an essential element. We tested many combinations and worked in great detail with lighting designer Joost Ijssel to ensure that every moment of the evening had a unique lighting atmosphere. So each moment had its own particular light box. And this while remaining in a simplicity. This made the viewer feel caught up in a real show rather than a series of presentations. This artistic attention to every detail, even for things that may seem “institutional” is very important.

There was a rehearsal with each speaker as well as a general rehearsal in the afternoon before the evening, which made it possible to clarify many details.

English subtitles All the films were subtitled in English and the speeches were in English. During the “Voix animées” songs, the lyrics of the song translated into English were displayed on the screen, also giving the audience a greater “catch” compared to what was happening on stage, as well as a real discovery of the content of these amazing songs..: 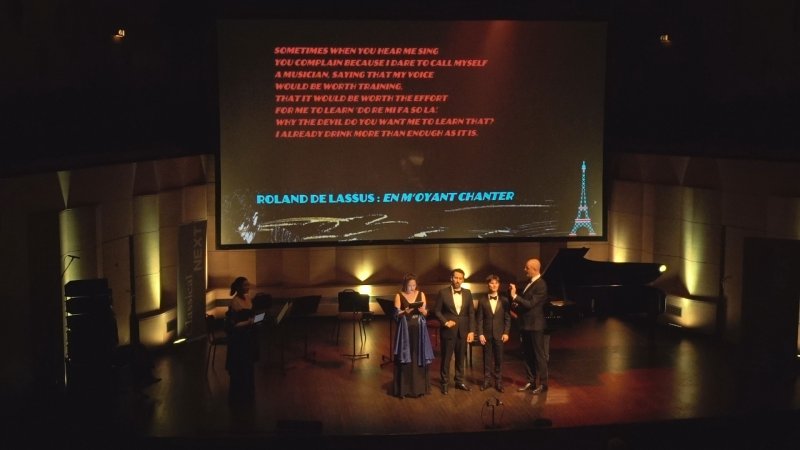 The main work team consisted of :

French artists talk about their work

Since 1993, Le Bureau Export has accompanied the French music industry in the development of its artists abroad, in the field of contemporary and classical music.

Every year, several hundred projects of all musical styles benefit from his support.

To develop its action, the Export Office relies on a team of 30 collaborators spread over 5 countries:

In 2017, the Export Office had more than 400 professional structures members and users of its services; and nearly 500 projects benefited from its support (advice, networking, logistical support, promotion and/or financial support, etc.).

The Export Office, Business France and FEVIS are working together to coordinate a French stand at the event, bringing together representatives of nearly 20 French cultural companies and ensembles.

De Doelen is a very large concert hall and a leading congress hall in Rotterdam (Netherlands).

De Doelen is one of the largest concert halls in the country. Every year there is an international programme of concerts of classical music, world music, pop and jazz. It is also a conference building that hosts many professional events.

The 4 large halls and 30 sub halls are used more than 1200 times a year for various events: concerts in all genres, congresses and other business events. De Doelen is also a popular venue for high-level international events, including the Rotterdam International Film Festival, the Gergiev Festival and Classical:NEXT.

De Doelen receives more than half a million visitors every year. About 25% of Rotterdamers go there every year. 49% of the audience comes from outside Rotterdam.

De Doelen is one of Rotterdam’s strongest cultural brands. 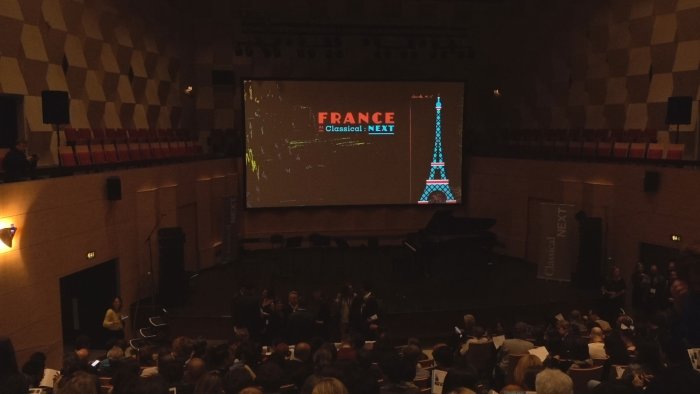 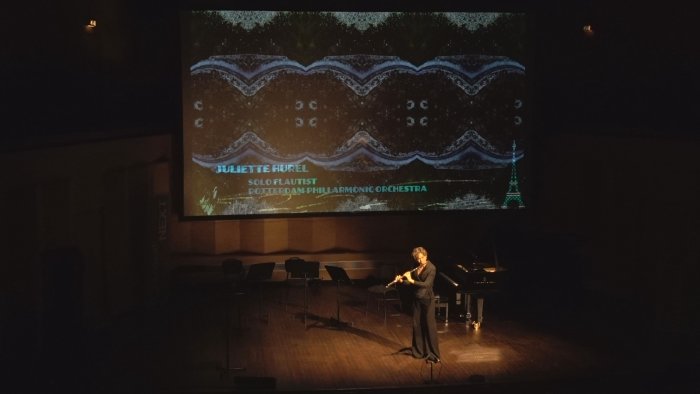 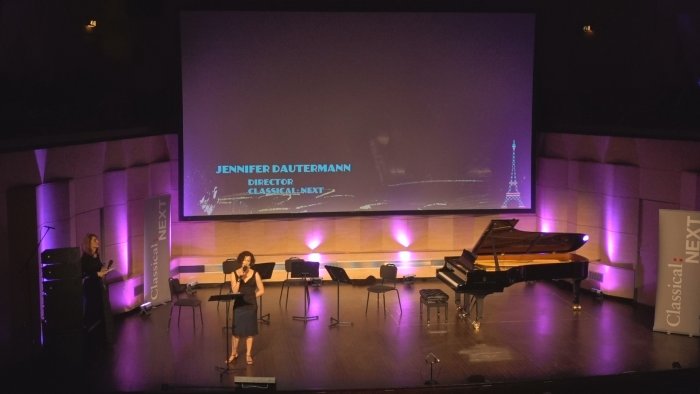 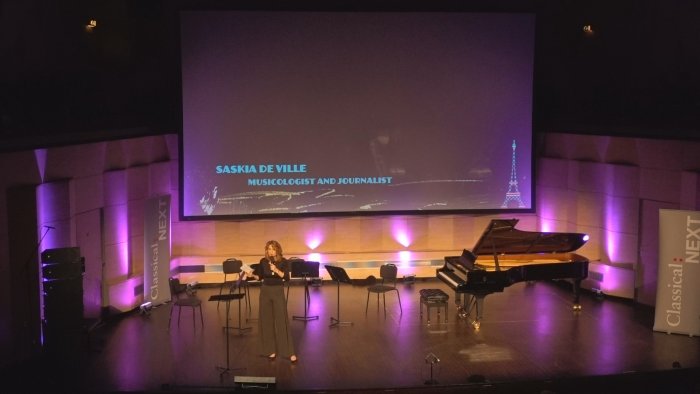 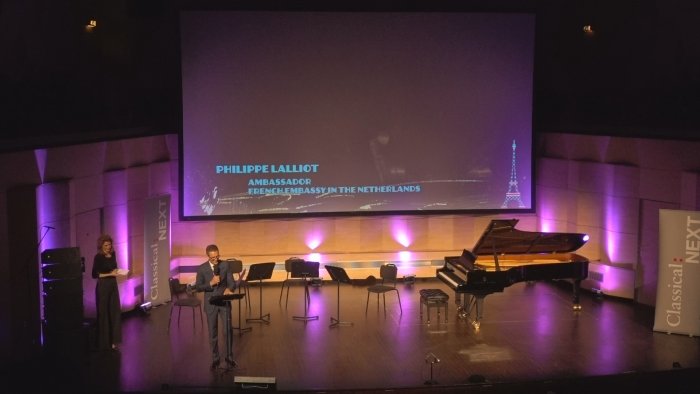 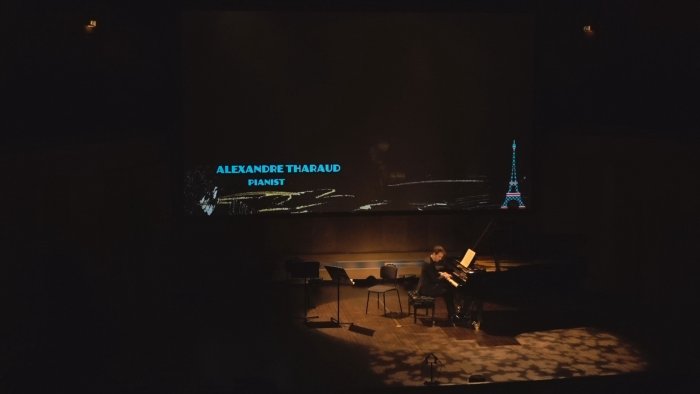 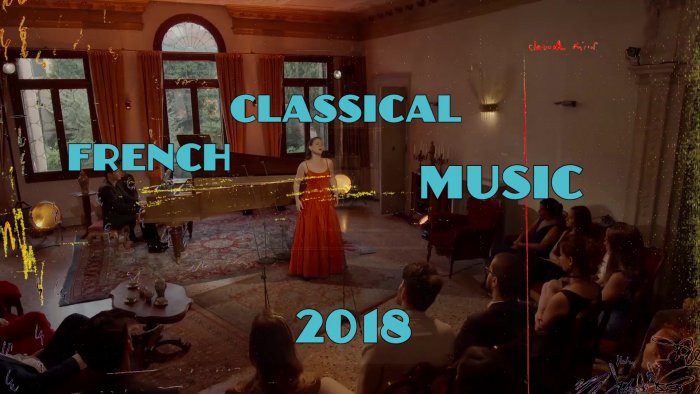 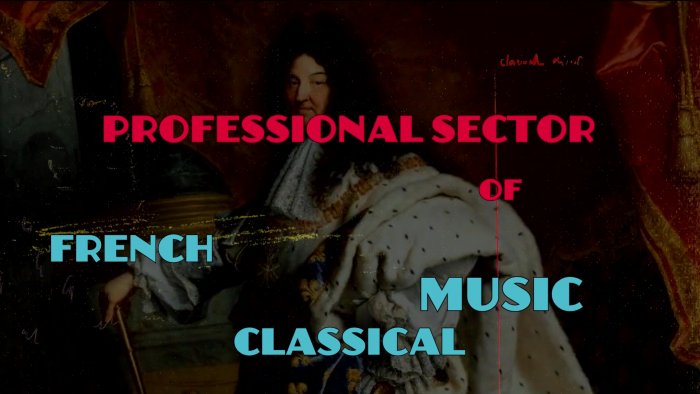 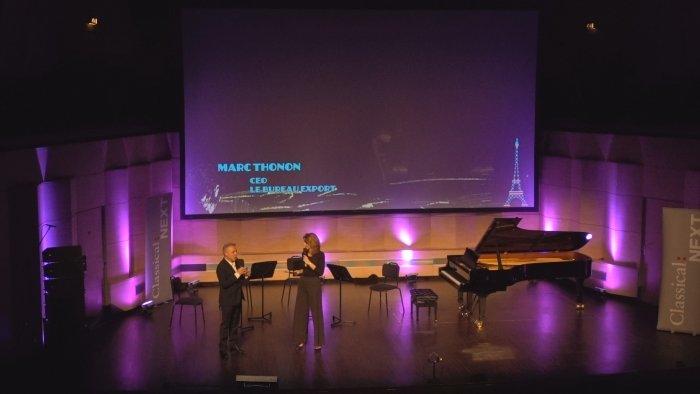 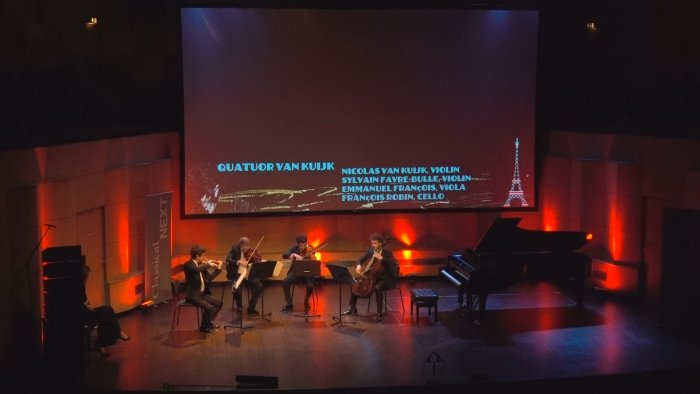 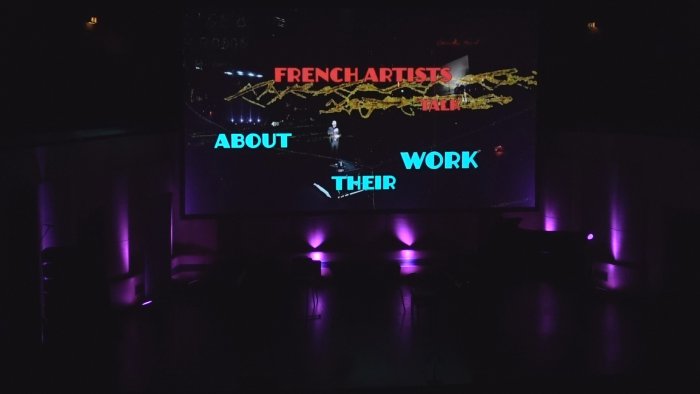 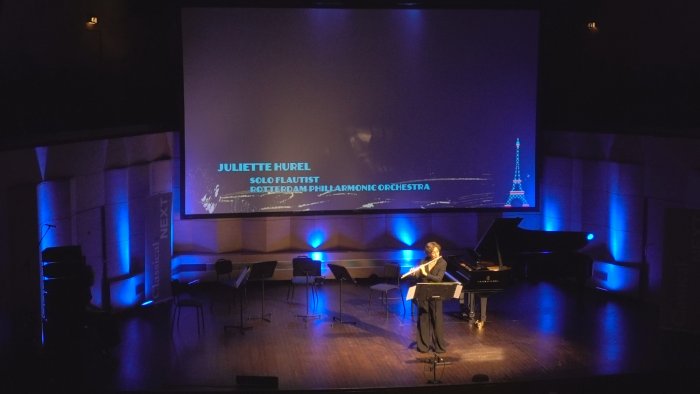 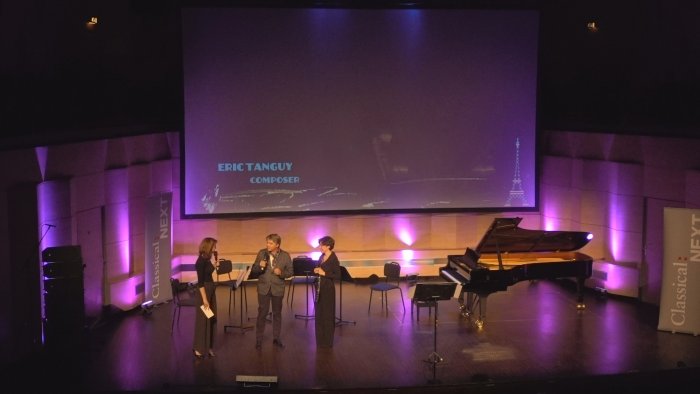 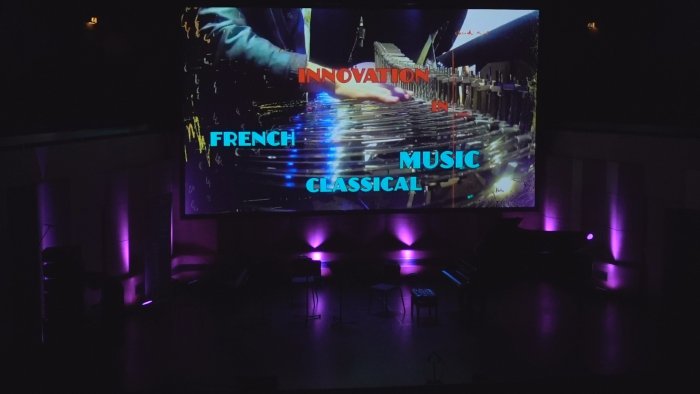 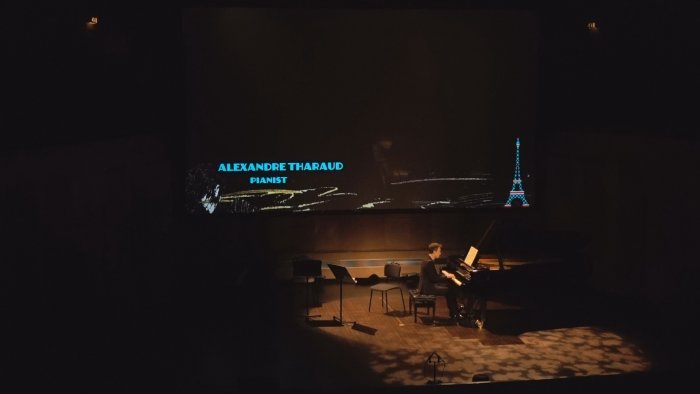 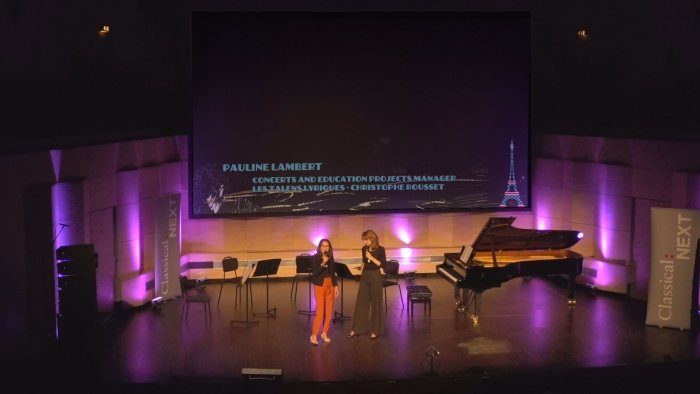 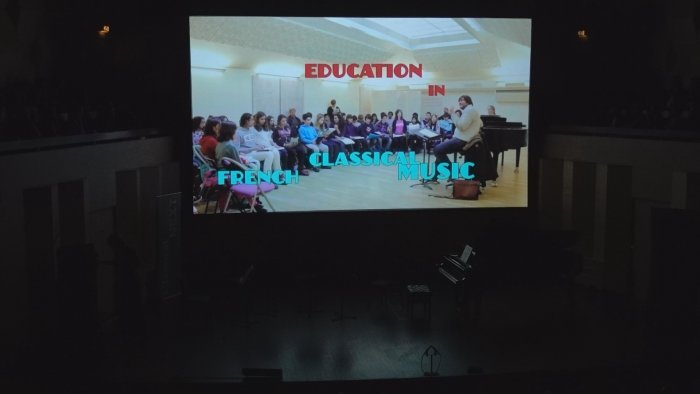 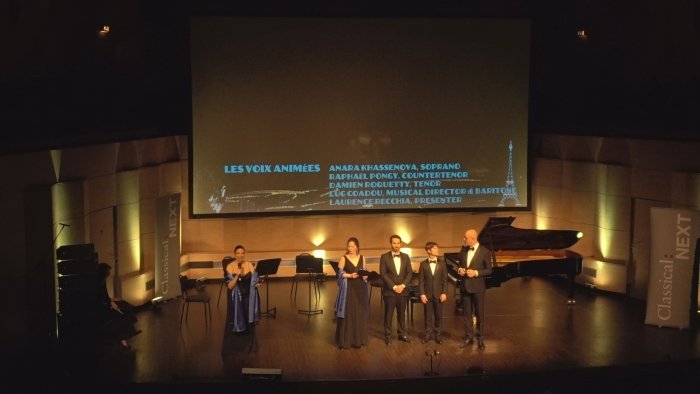 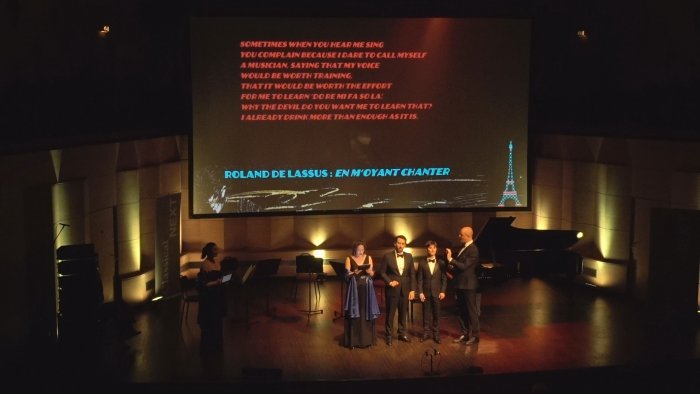 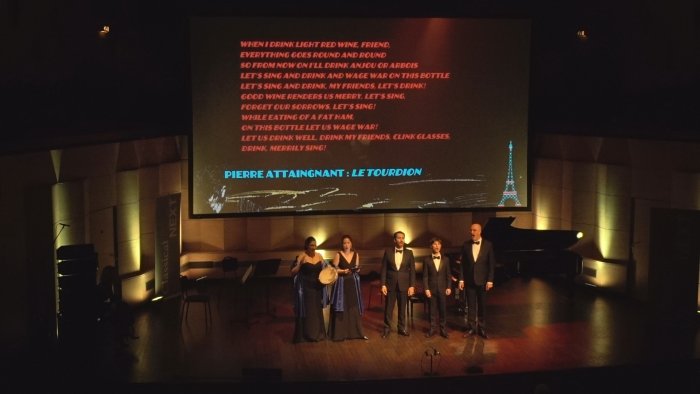 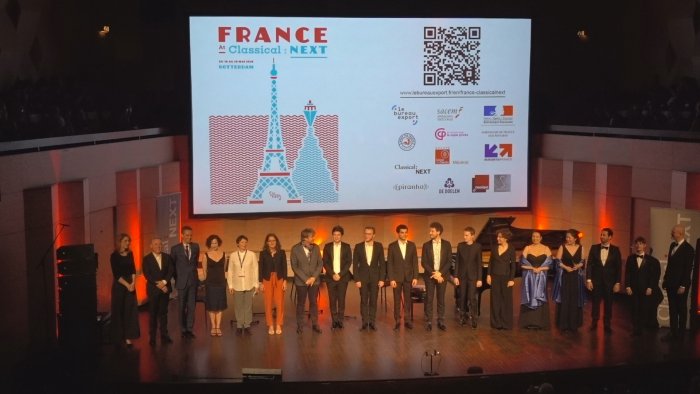