Day of reflection and common development of innovative projects, for cinema operators and mediators.

The ACRIRA and the GRAC (Rhône Alpes region), within the framework of their “Ciné Lab # 6”asked me to participate in the animation of a day of reflection, questioning and development of concrete projects to imagine new practices for cinemas. The participants were film operators and mediators.

This day was proposed, designed and co-hosted by Amaury Piotin (ACRIRA) and Isabelle Perez (GRAC ). It was held at La Vence Scène in Saint-Egrève.

The morning was devoted to a “participative conference” that I animated, on the issue of the stakes of contemporary images for the public, especially for young people. What new tools, what new uses, what new challenges, what new actions.

It seems to me very important to support the work of cultural action on philosophical, sociological, aesthetic and psychological reflections, in tune with the reality of the audiences addressed.

We also discussed the organization of work and methods of collective intelligence. Risk projects with the public. To work otherwise to give itself the means to build innovative and relevant projects.

I started the conference with a projection of animated films made in workshops on all the walls of the cinema: ceiling, sides, background, and finally on the screen. And with a hand-held video projector in the middle of the room. The viewer’s posture in the room is completely changed.

I had also brought a number of tools: pico-projector, camera and virtual reality helmet, polaroid camera, mini analog synthesizer, etc. For inventing new propositions must be done with the tools. Let us not forget that cinema is first and foremost a technology.

At noon, everyone could try their hand at the itinerant projection with a pico-projector.

The second part of the day was devoted to the collaborative design of innovative actions. Three groups were formed, in three fields:

The Pictures group I animated the group “What images in the cinema?”. We began by asking the elements of a common reflection, which then had to translate into ideas of innovative actions to propose. I had given instructions: not to propose actions that have already been done, to invent something that has never been done.

Here is the film that gathers our ideas, shot in sequence on the spot, and audio recording of the morning conference.

Location Group Here is the Prezi of the group “Place”. Surprising ideas for viewers to reinvest in the venue. Link to Prezi interactive presentation : https://prezi.com/p/cok1bscnk4e-/#present. 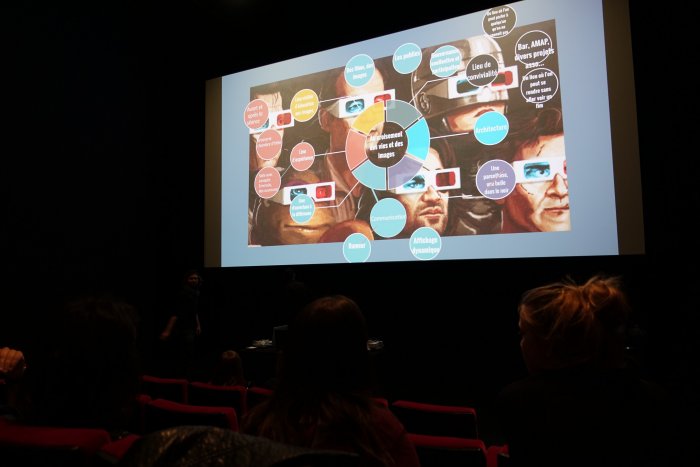 The Audience group The group “Publics” proposed a project of application of playful recommendation of the films, by colors, themes, to divert the automatic recommendations of the websites. This could also be implemented simply on a wall in the lobby of a cinema, with post-it notes. Use humor to present the films. Prototype of the app, made with paper :

Report of the Day

It was very productive, concrete and motivating to take the time to carry out a genuine collective reflection and then to have the requirement to collaboratively imagine ideas for cinemas.

It really encouraged me to pursue this type of collective intelligence. It is a living way, very effective, it seems to me, to reinvent cultural proposals in the field of cinema. 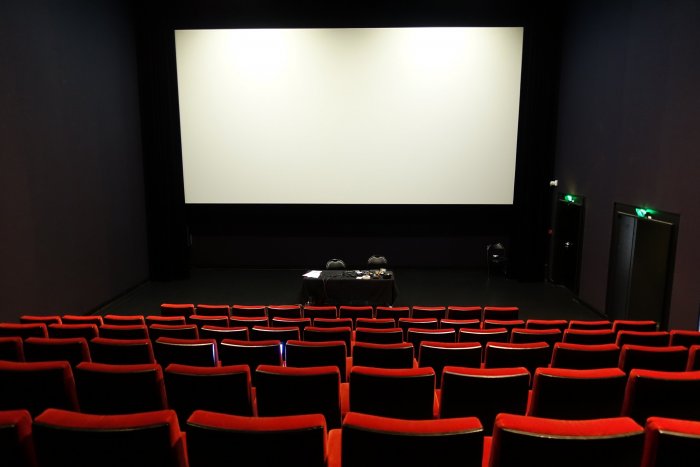 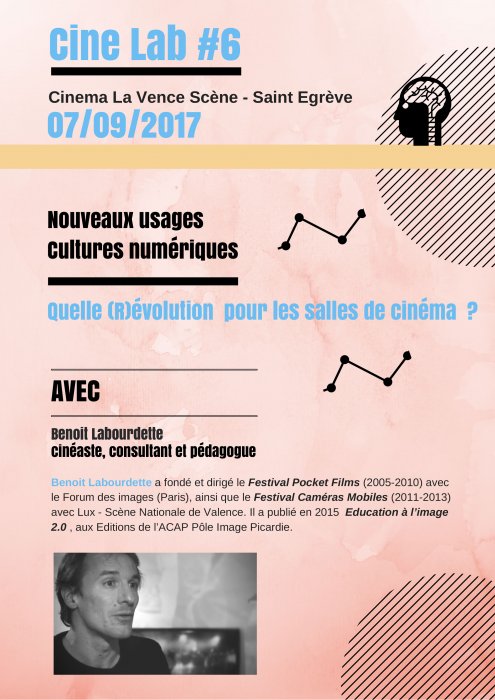 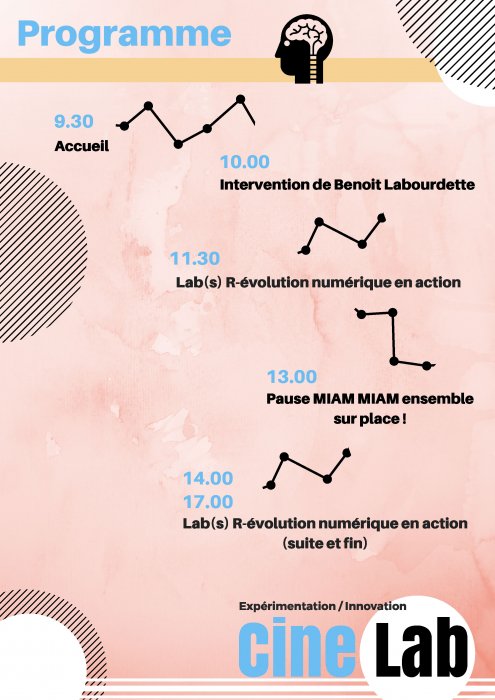 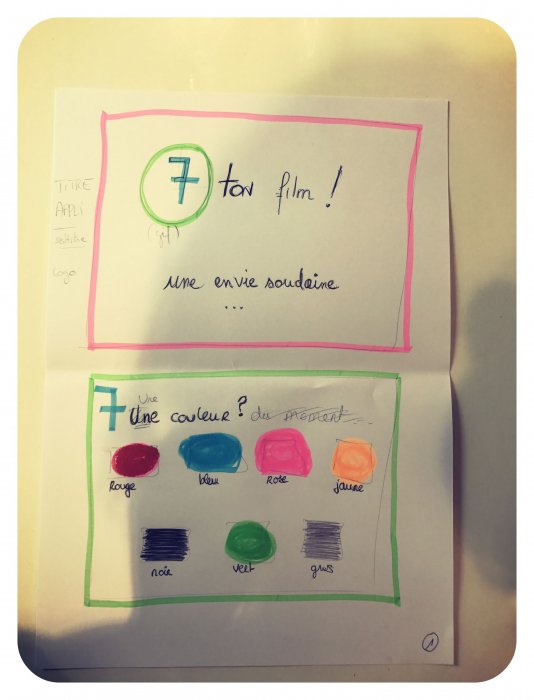 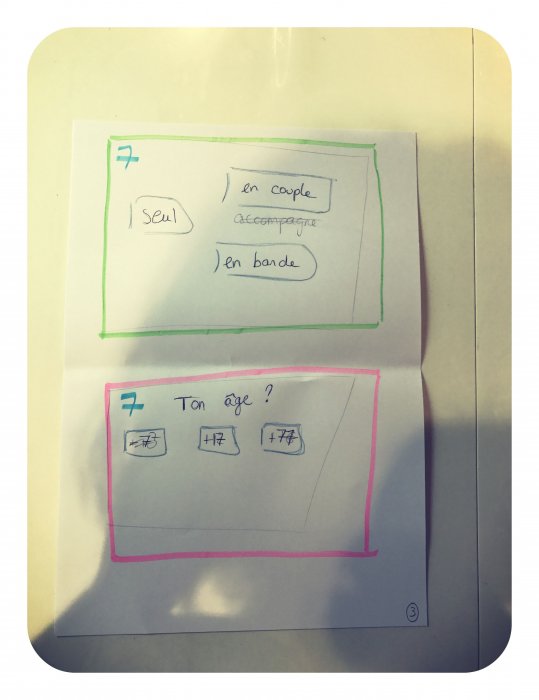 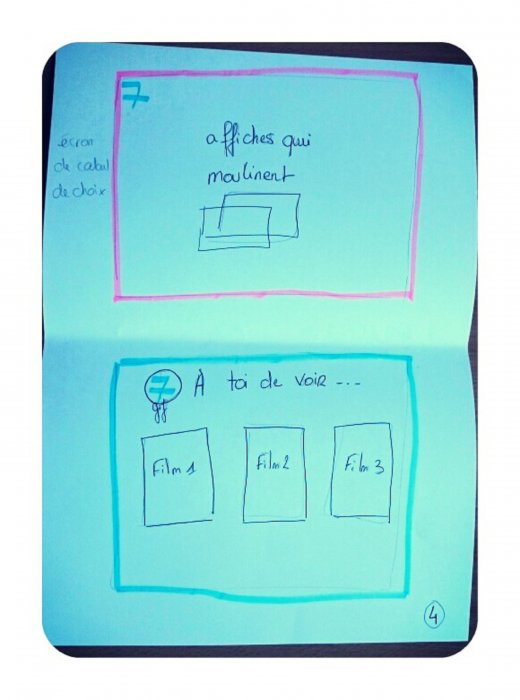