The Company, place of creation in Marseille : drone workshop

The Company, place of contemporary art in Marseille, led by Paul-Emmanuel Odin, invited me to offer to local youth, in the central and very popular in Marseille where it is an audiovisual creative workshop with drone.

For three days, young people, of all ages and backgrounds came, for longer or shorter times, experiment with me a work of imagination with the gaze of this strange flying object that come now gently in our daily lives.

The meaning of audio-visual workshop with drone

The drone, since a long time only as military object for surveillance and and death (mainly from the Gulf War in the 1990s), has for some years as a helper object to agriculture, archeology, shooting, and soon a “social” object, shooting personal, or delivery of trade (the United States opened their airspace for commercial use from September 2015), etc. It also makes pictures, and goes by this “immersive” vision (you can see from a distance what the drone sees). It is also an object of representation of the world, its gaze will be increasingly part of our lives. But what is this gaze ? Where do we look ? We now know that we live in a part of our lives in pictures, including those that we produce, and broadcast daily. But then, what are these new pictures, that will change our lives ?

It seems to me that offering people to take ownership of these pictures, to invent, to write with, pervert the first uses of these devices, to play with, is not only fun, creative and a place for new expression and topics, but is also very important to build our own relationship, free, to these new modes of representation being built right now, but may have been well aware of.

The “world seen from above” is a representation via the mapping in particular, that we use every day, part of our collective imagination, but the processing is not ours, it is preempted by big industries. If we make, ourselves, pictures seen from above, it’s a pretty striking relationship, a “takeover” demystification, very rewarding, especially if, with these pictures, we try to build and convey something sensitive, ours imaginary, to others.

The “disembodied eye” of these machines is a vision that fills growing our imagery. Indeed, before the drone, when we filmed or took a picture, there was a body behind the camera. If someone looks at the lens, on a picture, it is a look to the photographer behind it. Thus, the image was embodied. By cons, in a virtual world (3D game for example), we put the camera where we want to see our body transposed in an avatar. So the picture that is seen is not personified, it is floating, disembodied. The drone, which is a kind of program that has taken shape (as it is by the software, automatically analyzing the information coming to its multiple sensors, which controls four propellers, it goes where it wants in space), we therefore see our real world through the virtual eyes... So who is looking ? Where are we, when we see these pictures ? Who are we, perhaps, since sharing the gaze no longer requires a physical body ? What happens to our body, in this world ?

This is to work on, through creativity, all these questions that unfolds, for me, the meaning of such a type of workshop offered to young people.

The breath of gaze...

In this workshop, the groups sometimes came for a short time, so I designed and tailored to the public, proposals for collective creation, practical, fun and productive, which I summarize here synthetically, which you can see (further down the page) some filmed experiences that result.

The goal gave the participants were explicitly to create short films with drone, which would be publicly presented on the evening of the last day of the workshop.

Paul-Emmanuel Odin noted that when are filmed with a drone, propellers, which turn very quickly made a great wind blowing over us. So this is a gaze that breathe on us. Amazing philosophical metaphor, given that (thank you Chantal Deckmyn), the root of the word “psyche” (mind) is “psy-”, ie breathe. The breathe of the spirit, the movement that drives the language, embodied in manufacturing pictures by drones.

The proposals of work

Over work, we explored, invented, these proposals here synthesized. Some are included in the visible films here.

The picture is not given

It’s really hard to control, fit together with all contingencies related to the mastery of a technique, still relatively rudimentary, and the elements, wind, barriers, trees, fences, walls, houses, angles streets, stairs ...

At the same time, at the end of the second day of the workshop, thanks to a large gust of wind, the drone went to ruin on the roof of a five-story building. We had lost control. The object, not only we had escaped, perhaps forever, but also contained the pictures of the shooting of the day. It took, with young people go looking for the pictures in a very concrete way : understanding what building it was, the entrance was on another street, find the people who live on the top floor, then from home climb on the roof (I made it myself...), and crawl to continue the quest, while the mistral rode at night, do not find it, and finally, perceiving far, the two small red LED on the machine, and not fail down to bring it back !

I was, on a each day, accompanied by Tristan Fraipont, artist and responsible for the workshops at The Company, to invent work and its meaning with the participants in a beautiful collaboration. Outside, for example, young people not enrolled in the workshop, came to join the dynamic and continued the workshop.

Among the participants Louarma Mohamed, a young man of 17 who had a lot piloted the drone, and Sand, a young artist from Marseille, very involved, both in sound creation and editing movies.

All experiments have not resulted in films finalized, here are those that were presented at the briefing session of the workshop. 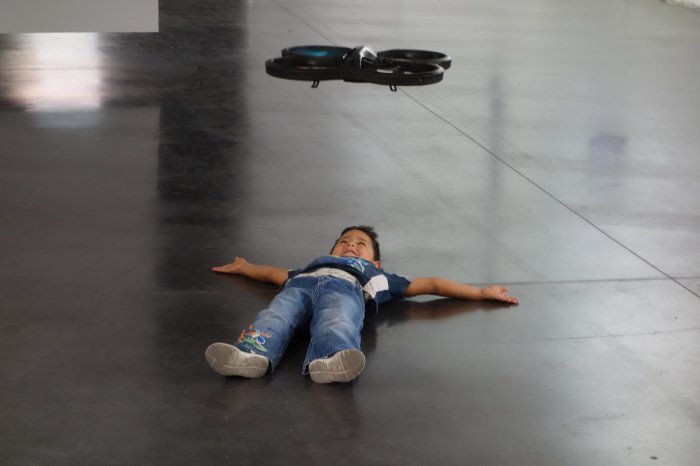 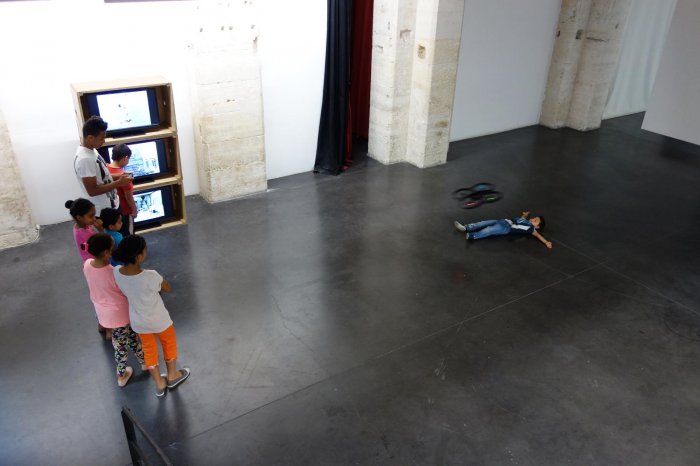 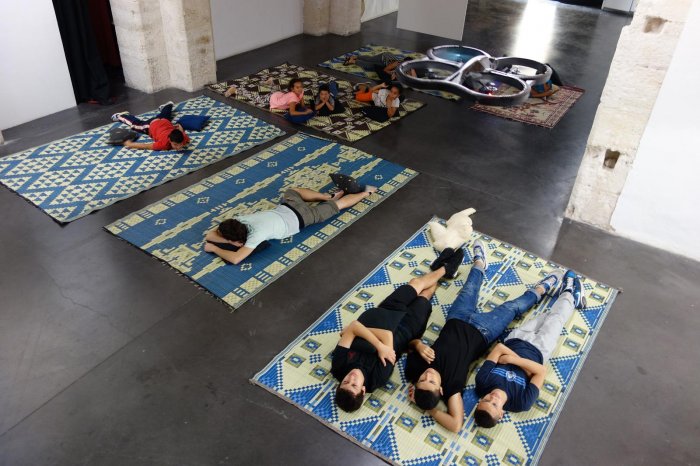 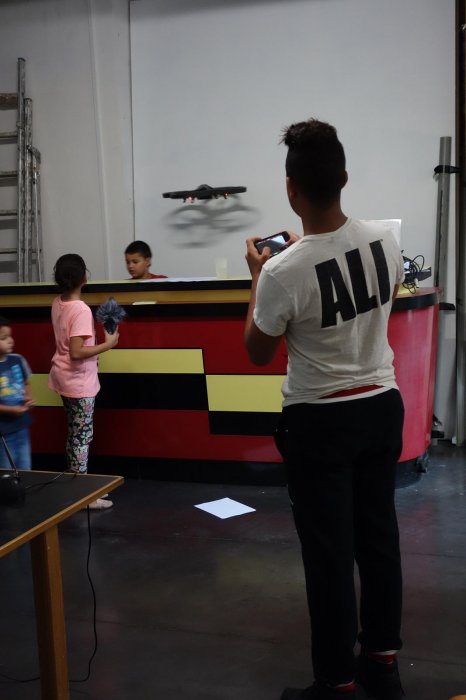 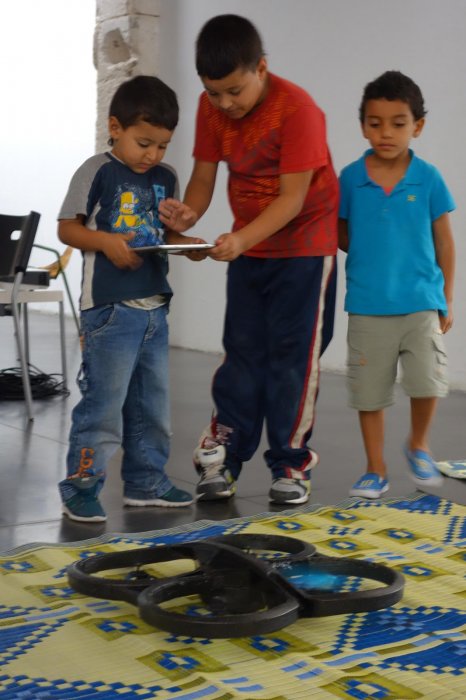 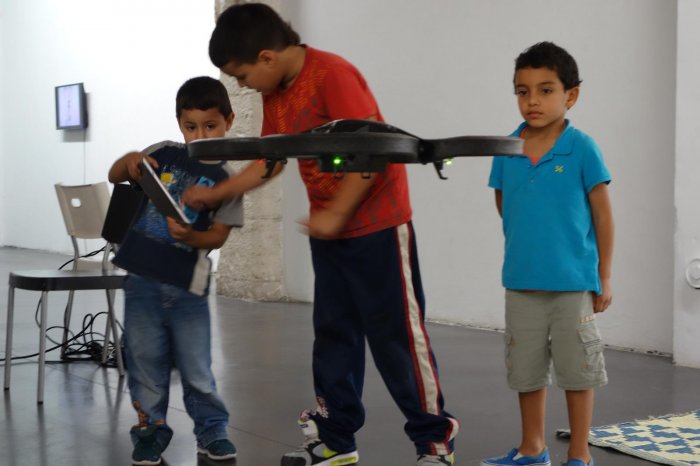 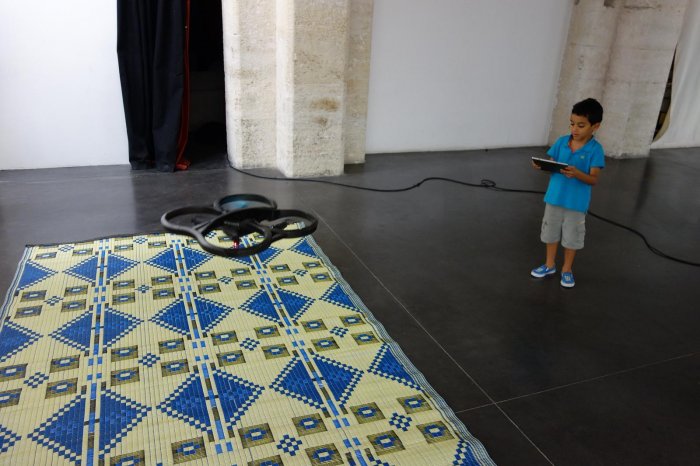 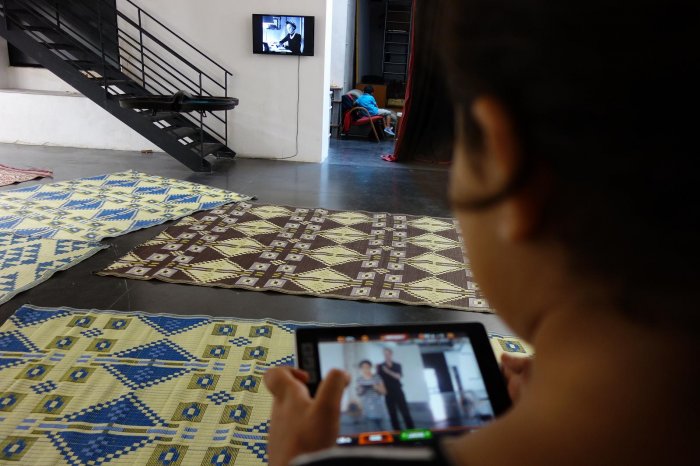 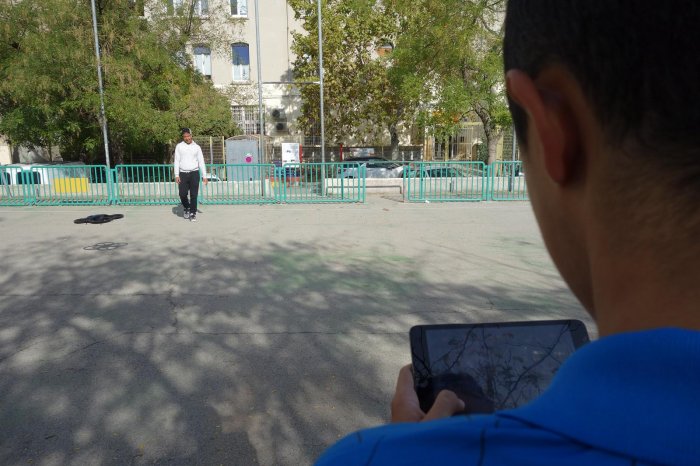 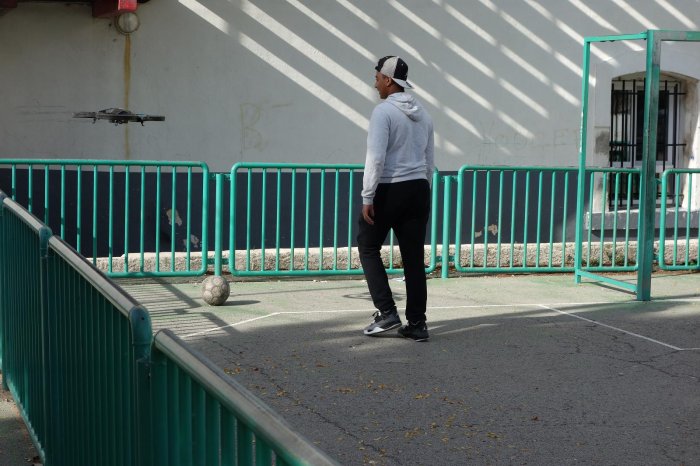 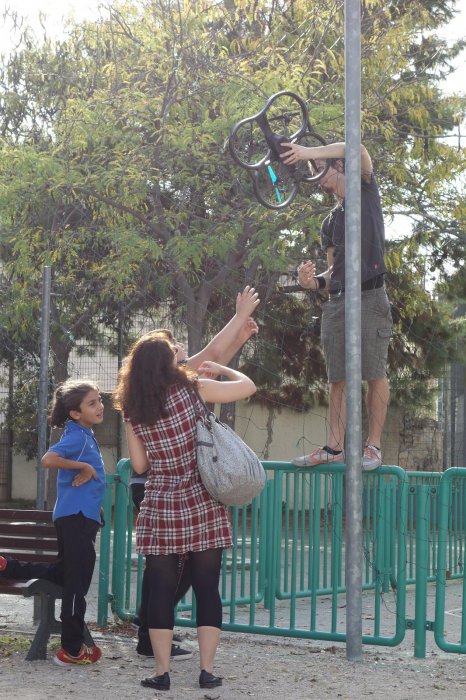 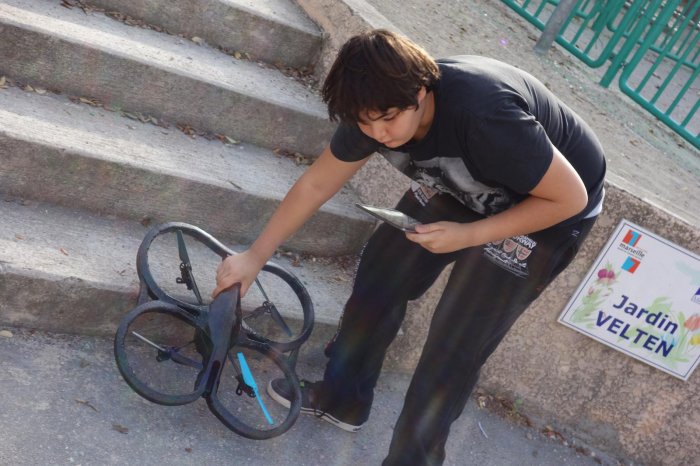 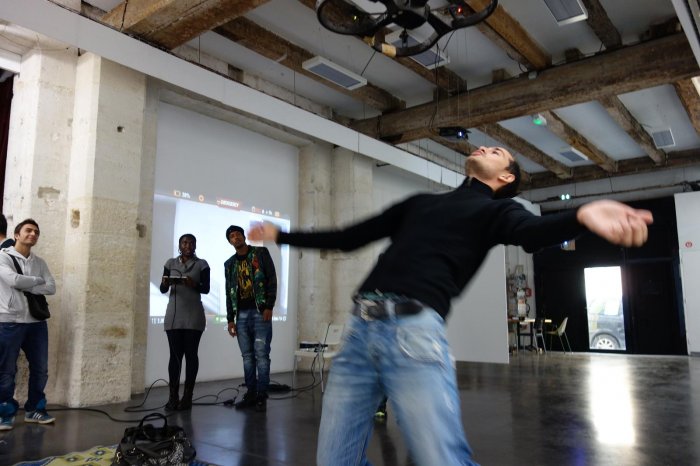 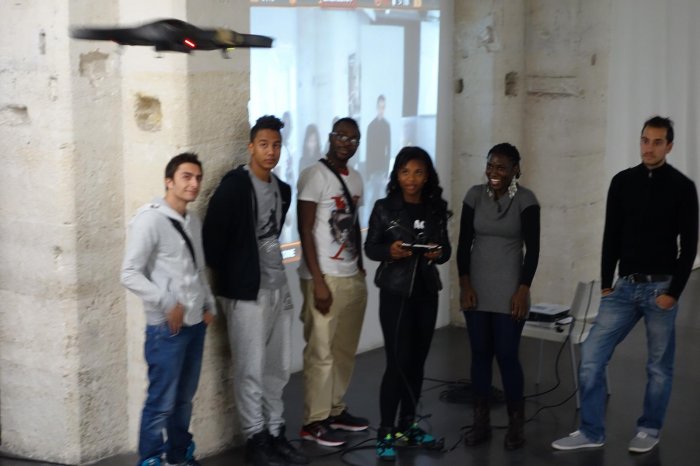 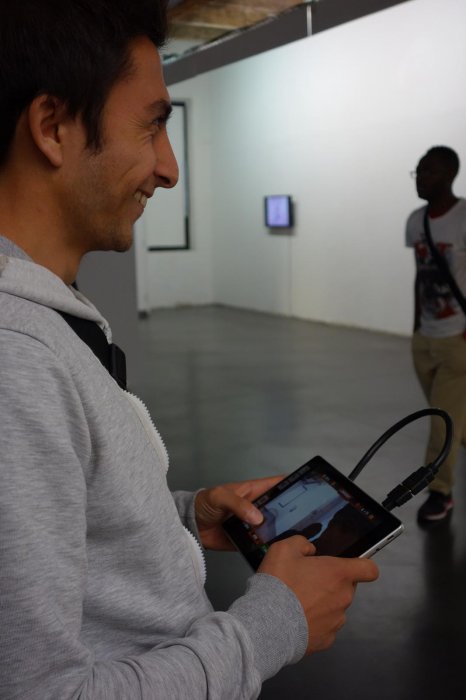 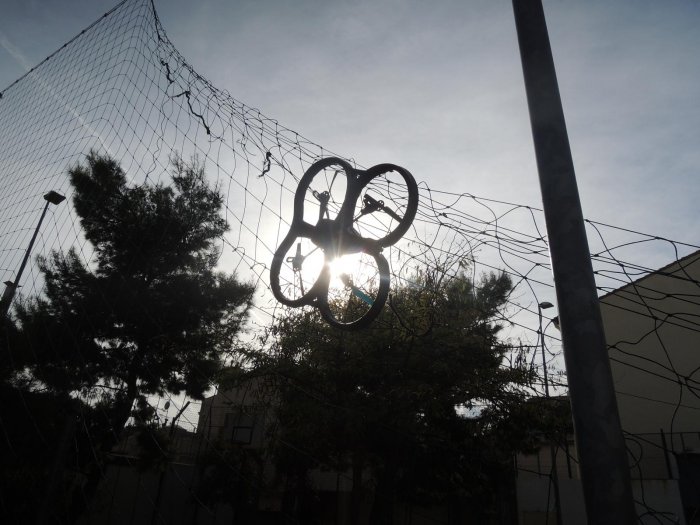 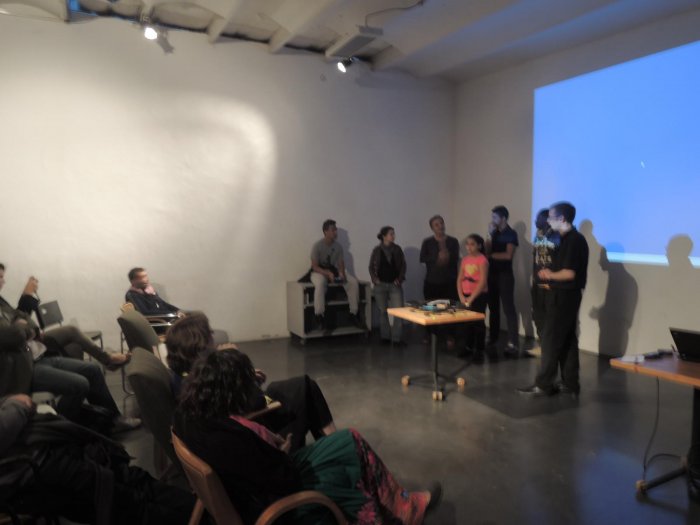 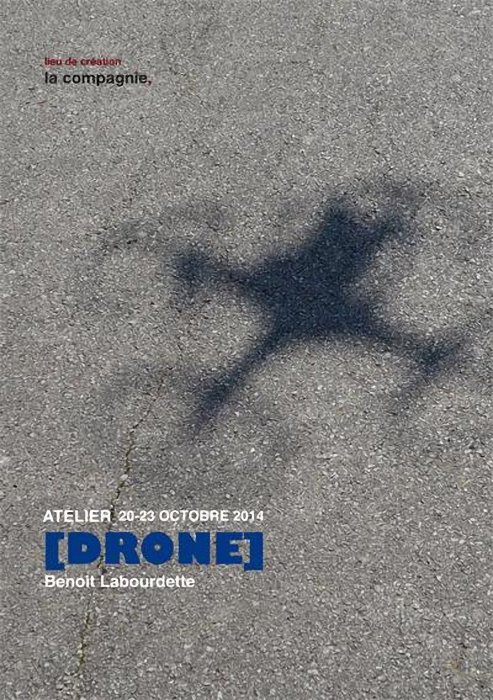 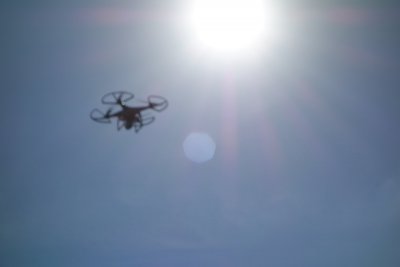 The drone is “democratizing”, begins to enter our lives. The world seen from above, the real world through this flying eye, disembodied, as in our vision of virtual worlds... our representation of the world is changing because of this new “look”, which is spreading. But what is the point of view of this disembodied eye ? What political position holds on it ? What new aesthetic derived ? What relationship to the body, to the territory, to the architecture, is deployed there ? In short, what is happening to our viewpoint ? It seems important to me to explore the use of these machines in their (...)