People sitting, working in a small office, with the background the street behind the window. The superposition of four times by subtracting the pixels can give, if you look at a single character, an opening on the “depth” of the person, thus ourselves.

Shot in the gallery of Revoir edition in Paris (France). With Pip Chodorov, filmmaker and founder. Here, there is the awareness by characters that a film is being done, so this film is self-referenced, what distinguishes it from others in the series. 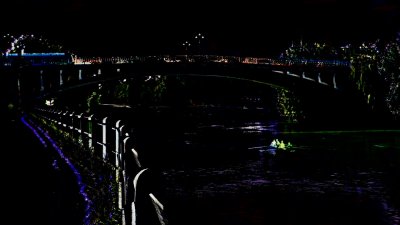 Video installation. These are one-minute videos to be broadcast repeatedly on black surfaces. Work on the sensation of the landscape, the project to transmit an immediate impression. As a mix between Lumière and impressionist paintings ... made of pixels. Four image layers, whose pixels are subtracted from each other, a mostly black image with objects and bodies are revealed when they are shifted from each other : this is the time that makes the image.