In 1999 and 2000, when I made ​​this film, my principle was to carry the smallest digital camera DV good with me for a year, during my daily commute in the “big city”, Paris and suburbs.

So always have the camera on me, forcing me to do anything, I was filming that if there was something right compared to my current concerns, namely the “chronic fatigue city”, this kind of exhaustion that can take dwellers.

From these images, I made myself the editing, as and when : the images conjured texts, texts fed future images, and music, I was working in parallel (the remixes synthesizer scores of JS Bach), printed rhythm to the whole. In short, there was no stage, the image before her, or the script before filming, there was a writing job with these materials: images, music, words. The tool I used was the computer, I also used it to write the text. Thus, the making of this film had more to do with a writing job with a work filmmaking in the sense that it is usually understood. This is why we named the project a “movie-write.”

A DVD had been produced, allowing free circulation between reading the text and watching the film.

(no english subtitles yet. If you need it, please ask : benoit benoitlabourdette.com) 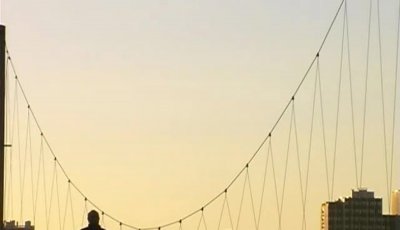