We designed, me and the stage director Louise Moaty, a video installation to shoot live on stage of the opera “The cunning little vixen”, produced by the Arcal, released January 15, 2016 at the Maison de la Musique in Nanterre (France), on tour in 2016 and 2017.

The show is a set of live film, made by singers, with puppets, using special effects and superimpose picture techniques of silent film.

We received in June 2016, the stage director Louise Moaty, myself and the whole crew, the “Prize of the best creators of scenic elements” of the professional association of the criticism of theater, music and dance. 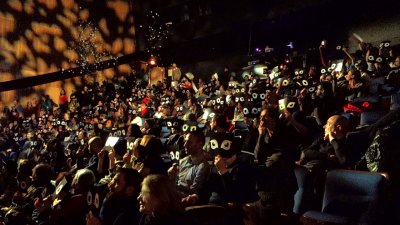 Performing arts is my training and my initial culture. Young actor in the 90’s with among other La Compagnie du Chaland and Trottoir Express (France), I was teached to the work of the mask and the art of the jester with William Nedel. I also very early associate film and video on stage, including making many recordings of performances. In recent years, my work of film distribution in the form of live performance and multiple collaborations lead me to reinvest more directly the scenic design work, including accompanying projects with technical innovations and dramaturgical writing related (...)