“Scrivener” to write a script

Scrivener is probably today the best software to write a script. Synthetic discovery of this tool.

Why a specific software to write a screenplay?

Why would we need specific software to write a script? Don’t we just need a pen or a word processor? Why go to “complicate life” with the learning of a new tool when, in the end, the challenge is above all to let ideas come out of oneself, and then organize them in writing?

One can legitimately think that software will come with its conceptual norms, even unconscious, which will harm our freedom of expression, therefore our creativity.

The goal is to be as free as possible to imagine and organize your ideas. These two issues, creativity and organization, are key to being able to move forward in writing an object that will surpass us.

For those who have already written, you have probably already experienced an energetic start, with ideas that come, spontaneously, freely, alive and joyful ! And then after a while all these ideas accumulated in a Word file or on paper begin to make a “mass”, indistinct, in which we no longer see clearly. Finally all these beautiful ideas, by their accumulation, block us, prevent us from advancing. And then what’s the point of adding new ones since they will only contribute to confusion anyway... In short, we find ourselves totally stuck...

The free ideas of the beginning finally produced a major block, which stops our creativity, which affects our freedom.

A text that goes beyond us

The text we are about to write will be beyond us. We can’t have his entire script in mind. Writing allows us to bring out what is going to be built outside us: the ideas, on paper, placed next to each other, will give us new ones and will live almost by themselves. Those who write all know this moment when the text began to have its own life.

At this stage, we realize the usefulness of a macroscopic tool: post-its, mind-maps, etc. You can “tinker” with this tool with paper and pencils. But it carries within it the defect of being only macroscopic.

Scrivener->https://www.literatureandlatte.com/scrivener/overview], which exists since 2007, proposes two main areas: a tree area and a writing area : 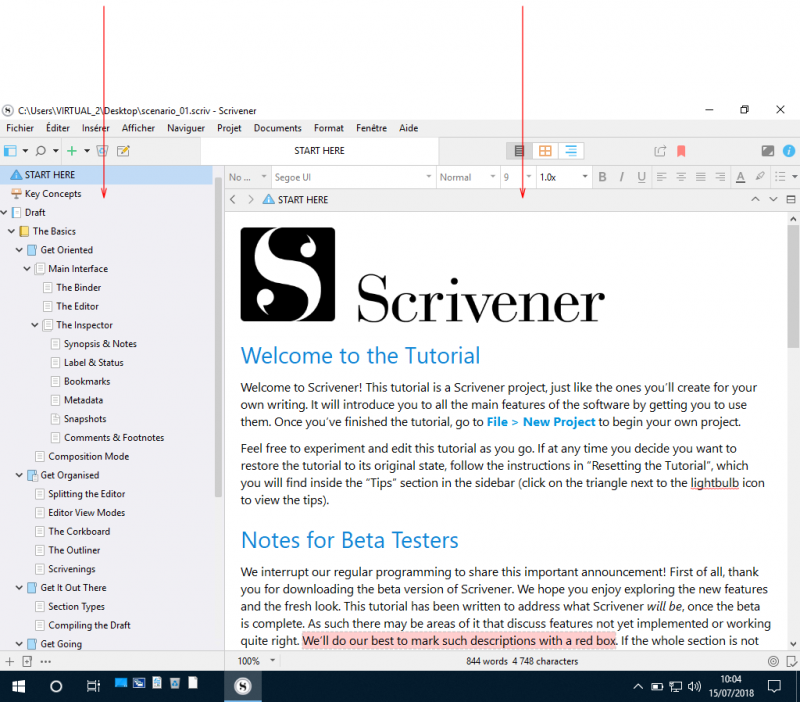 It is in this simplicity that its effectiveness lies: you can create as many “entries” as you wish in the tree structure, reorganize them as you wish, and a simple click on one of them allows you to write.

Thus, one can “throw away” as many ideas as one wishes, they never form an indistinct whole, they are always accessible and reorganizable. The macroscopic (the tree structure) and the microscopic (the content of each text) are linked.

Important : you can display the text element by element or globally, which allows immediate circulation between the work on a detail without being “polluted” by the whole and the vision of the whole text. It is here that creativity, which needs freedom and independence, can be fluidly articulated with the general organization. 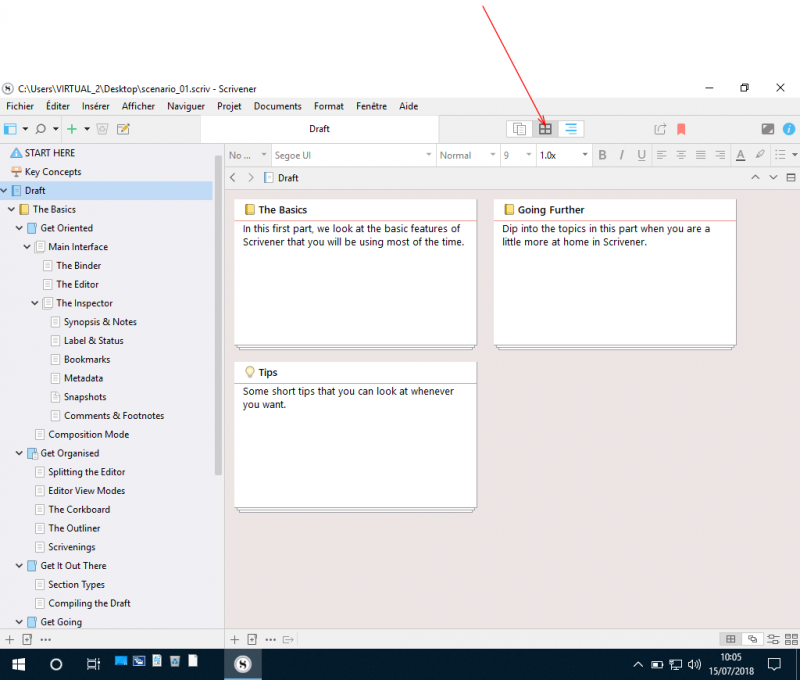 A simple click on the displayboard displays “maps” corresponding to each text. They can be moved relative to each other, re-ordered at will, which is more embodied than with the tree structure. 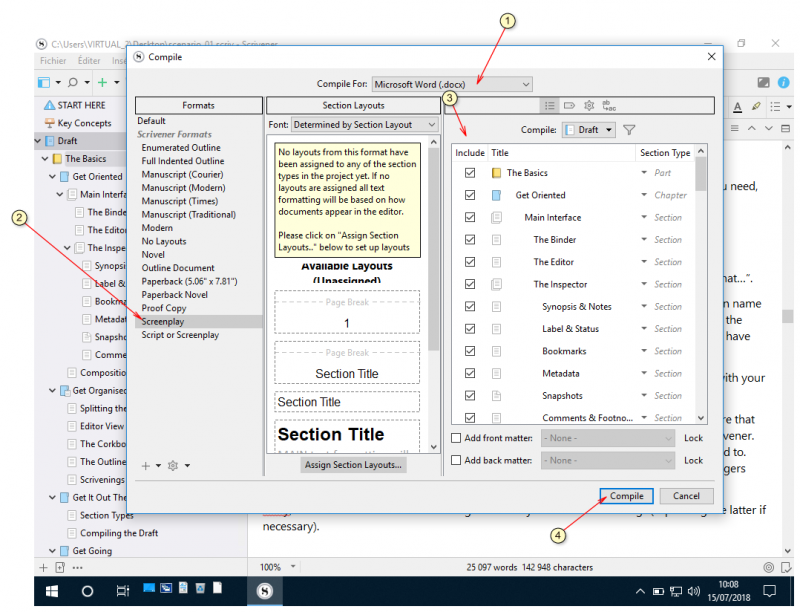 When you want you can “compile” your text, i.e. create a single organized file (format.doc,.pdf,.epub, etc.), according to rules (very simple to understand).

Scrivener integrates scenario-specific formatting tools, such as scenario writing software. But Scrivener has a wider scope, and is much less “fitting” than scriptwriting software. It’s a very open tool, focused on creativity and organization, which I think is most essential.

I have made a partial and incomplete synthesis here. I wanted to highlight the logic, the “spirit” of this tool, which seems to me key for scriptwriting, among other things, which needs flexibility and freedom.

Scrivener runs on Mac OS and Windows. A version for Linux is in beta version. You can download a trial version that works 100% for 30 days. It costs $45. 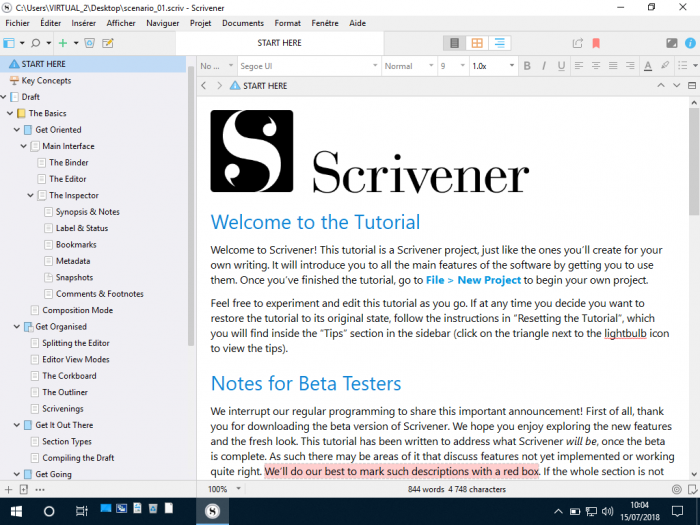 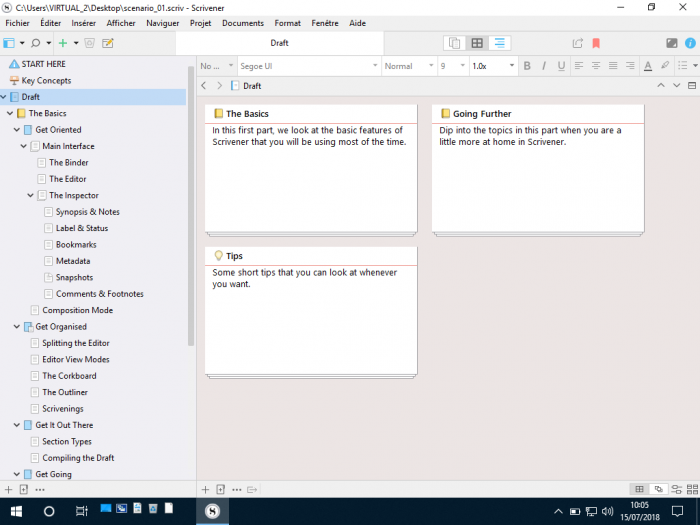 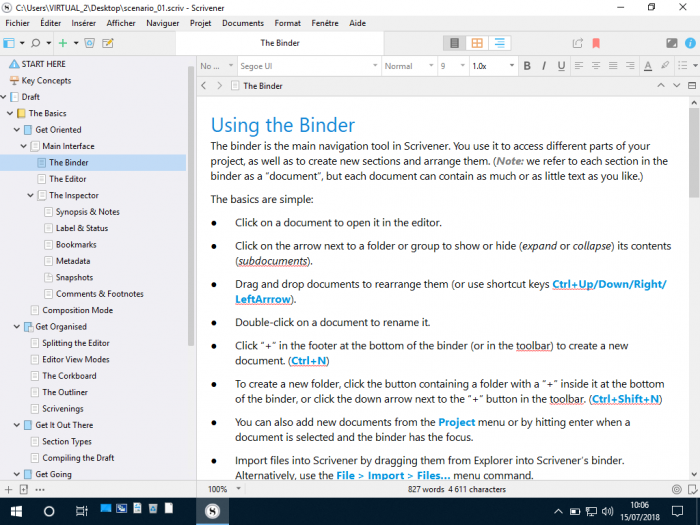 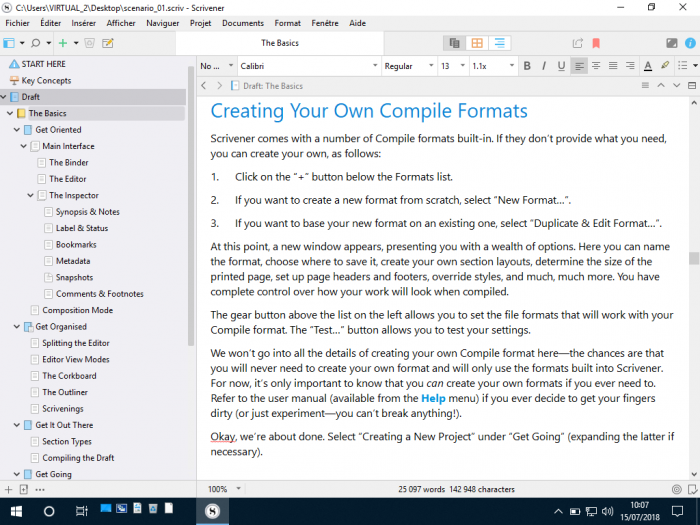 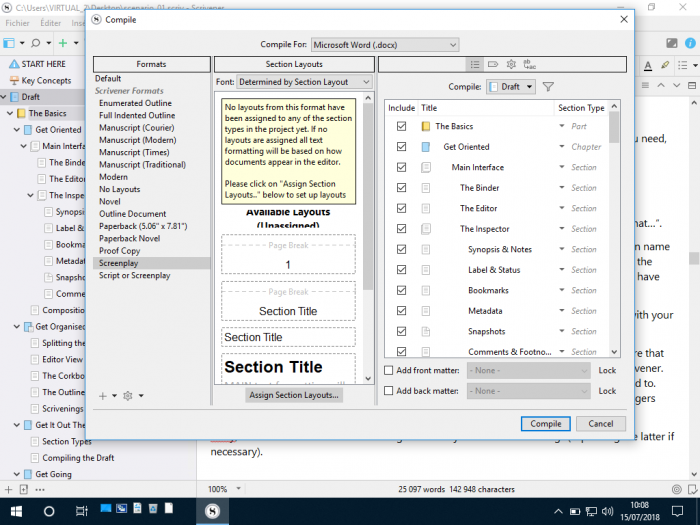