Chapter 1 : What is a photographic image ?

What is an image ?

To answer this question, the first question to ask is: Why do we see? How do we see? What do we see?

Keeping it simple: at the bottom of our eye, there is a “sensitive area”, which sends information to the brain, which reconstructs the image of what is before us.

How is it there in the back of our eyes, as a “picture” of reality that is before us? These are not items that we send rays, as was once believed, it is the light emitted by the sun (or other light source), which propagates rectilinearly, hitting objects which in turn reflect (like a mirror, which returns all the light rays). But the objects, according to their terms, do not always act like a mirror. Depending on the chemical formula of the object, some parts of the light are more or less absorbed and reflected more or less: this is what forms the contrast and color. 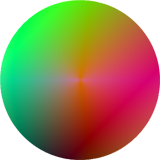 Indeed, the “white” light, which seems so simple, is actually composed of the sum of all the colors of “light spectrum”, ie all possible colors. You do not believe me? Draw on a disc of white paper about all the colors of the spectrum (red, yellow, green, blue, etc..).

Then, rotate the disc at high speed: you see ... white!

Back to objects based, therefore, their chemical composition, they absorb part of the spectrum, and return only the remainder. For example, an object that we see blue will absorb all colors except blue, which we refer.

The principle of photography

Photography is different from painting in that it is a mechanical recording of reality that is before the camera.

Before you can save the image, you must first make it exist somewhere: what is the role of the darkroom, the principle has been known since Aristotle (4th century BC), which was then put into form and widely used by the painters of the Renaissance (16th Century).

It produces a dark box (painted black inside), with one side a small hole (5), and in front, a surface layer of paper for example (6).

The light emitted by a light source (1) propagates rectilinearly. It strikes the object (2), which returns it does not absorb light rays so straight as (3). The small hole (4), can not pass up some rays, which come naturally hit the tracing paper which is at the bottom (6). It is therefore quite logical that image reversed, is formed in the bottom of the darkroom. 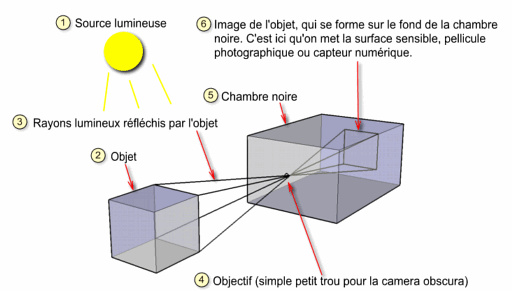 The painters used the camera obscura as a “model” to understand the laws of perspective. But if, instead of tracing paper, we managed to “save” to “fix” this picture we see? This is the challenge of the invention of photography.

In the 19th Century, Nicephore Niepce, a French inventor, after years of research, will instead of a paper layer plate coated with bitumen of Judea (natural tar) preheated. He leaves the plate several days in the darkroom (the photographed subject would be fixed!). Then, dipping the plate in a lavender bath, the parties who had not been exposed to light dissolve. So we see appear on a photographic plate negative!

Here is the first photo made by Niepce, he managed to fix permanently in 1826. This is a view from his window, in the village of Saint-Loup-de-Varennes near Chalon sur Saône (several days of exposure time). 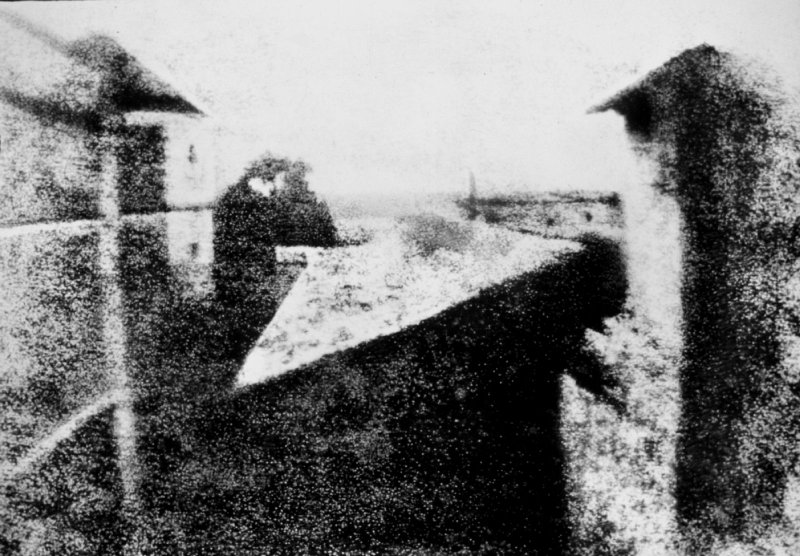 After Niepce, techniques have evolved, the exposure time decreased, and it was soon possible to save an image on a sensitive surface in a fraction of a second. In addition, the plate could become a flexible celluloid film coated with the sensitive surface, hence the name “film” photography. Celluloid was invented in 1876, and the photographic film in 1885 by George Eastman in the United States.